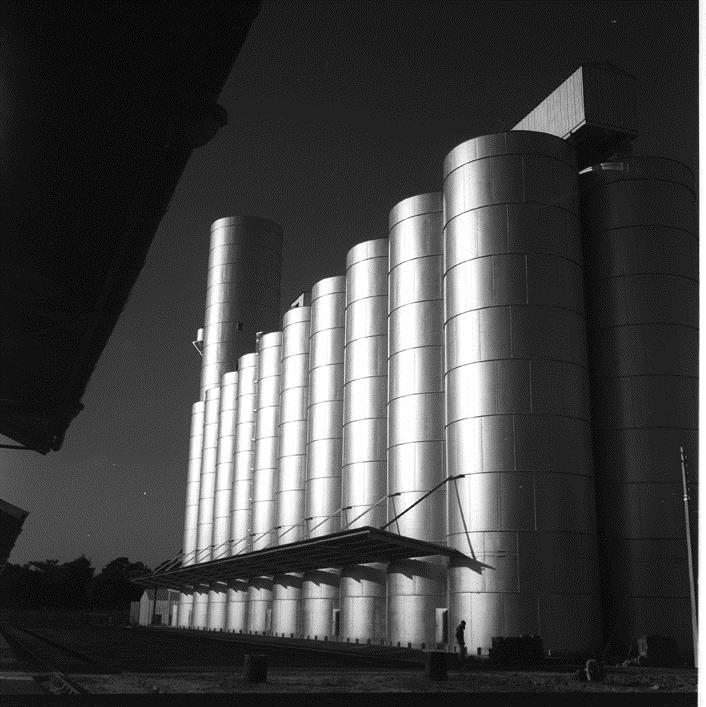 Galvanized iron silo at Hapur, constructed in 1955, you can see the characteristic tiling of the GI plates which were cast in the US and shipped to India for assembly. It stores 10,000 metric tons, and is still functional. Image from the Photo Division of the Ministry of Information and Broadcasting, Government of India, 1958.

This post underscores how the seemingly straightforward and yet iconic American silo evolved into a different kind of storage infrastructure when it encountered India’s histories and geographies of wheat. The American grain elevator – a specific kind of silo – holds a singular place in the history of architectural modernism. European modernists saw it as a formal and structural response to the United States’ growing outputs of grain across the nineteenth century. As a figure of the American capacity to innovate, the American grain silo offered European architects a model for how industrial form could influence architectural thought, finding ground in the dictum: form follows function.[1] The silo was a manifestation of industrial scales of grain storage. But since the US gifted India its first silo, this infrastructural figure of storage has had a different legacy in India’s political economy of wheat. In the decades following that country’s independence, storage came to be necessary to maintain a buffer stock – a quantity of wheat in reserve that would allow it to correct imbalances in the market price of the grain. Thus, silos formed crucial nodes in the management and distribution infrastructure of the state in the years after independence.

This post looks at storage infrastructure’s biopolitical nature, where the Indian state hoped to manage the life of wheat, to hold it in stasis—pausing its cycle of growth through technological and chemical control—so as to correct for errors in a possibly unstable future wheat market. The silo acted as a quantitative architecture: a calculable infrastructure deployed against the incalculability of weather and hoarding, absorbing surpluses and augmenting shortages to manipulate the market in wheat. In India the silo became infrastructure, a system whose material form allowed for exchange, not just across space, but also across time. Wheat from the present addressed unforeseen shortages in the future, while current markets could be insulated from foreseeable future gluts.

The government’s obsession with storage had its roots in the Bengal Famine of 1943. A robust buffer stock, they believed, could prevent the kind of crisis that decimated the Bengali countryside during that time, where rice-hoarding saw prices spiral, causing peasants to lose what Amartya Sen famously called “exchange entitlements,” that is, the capacity to exchange their labor for rice.[2] The failure of the World War 2-focused government to control distortions in the marketplace led to the famine in which between one and four million people are estimated to have died. This characteristic of the market to dissemble itself so as to dissimulate a scarcity, even when grain was present, worried the state and they fixated upon buffer stocks that they hoped could prevent false shortages.

Early attempts to create this buffer stock failed, as the indigent country struggled to meet production targets, supplementing shortages with American grain. The United States, facing gluts in its agricultural sector, instituted Public Law 480, a Food for Peace program that doubled aid budgets for use as a tool of diplomacy in their Cold War arsenal enabling them to influence the third world against the second. The shiploads of wheat arriving at the ports of Bombay and Calcutta distorted networks of movement and storage forcing India to move grain from urban ports to temporary points of storage in the countryside before it could be redistributed into cities, rather than the other way around. Aware of the strain on India to manage an ancillary supply route of wheat, the US gifted India a number of prefabricated storage structures, two of which were iconic silos made of galvanized iron.

Although the resulting storage had great potential, the gifted silo mostly functioned as a symbolic object; bureaucrats debated its actual necessity given that its capacity of 10,000 tons only held a fraction of the 1.5 million tons of imported grain circulated per year. They relegated it to Hapur, a town east of New Delhi that was arguably a waning center of agricultural production. Constructing this behemoth was its own complication for the Ministry of Food and Agriculture: cement for the foundations had to be sourced from outside the state’s quota, and American experts had to be hosted on its storage department’s dime, and ferried to and from the site on continually delayed schedules. This early attempt at storage all but failed to influence the political economy of wheat that it so hoped to do, yet its image circulated across the country, and came to represent India’s burgeoning infrastructural modernity.

It was only in the late 1960s, as grain became more abundant in the wake of institutional changes around the Green Revolution, that silo building accelerated, helping create a robust distributed network of storage, while giving the government a chance to establish their buffer stock. Silo and warehouse construction grew substantially under the new Food Corporation of India (FCI), an executive arm of the Ministry, housing the engineers, economists, and planners who calculate and manage interruptions and flows in movement of grain.

In these new conditions silo storage emerged as instrumental to the managerial state, the arresting of the life of wheat grains, allowing them neither growth nor decay, as an infrastructure for delayed consumption, a biopolitics forged from interrupting the flow of grain, biologically, chemically and economically, so as to precisely unleash it into a future economy as a corrective to markets that favored traders over the producers and consumers of grain. Through the silo the FCI manifested the calculable state, managing the wheat market by carefully balancing minimum support prices with predicted total outputs every year through a price committee. This bureaucracy of information was deployed through a series of government bodies at the central and state levels, each instituted to gather and disseminate either information or grain to support the Ministry of Food and Agriculture. This second iteration of storage construction involved loans from the World Bank, and concrete silos in lieu of iron ones – a response to the growing power of the cement industry in the country. The cylindrical shape of the concrete silo lent itself to slip-form, a much publicized technique where concreting was performed in one continuous stretch, slipping the formwork upwards, using the set concrete below for support.

Yet, managing silos was cumbersome, requiring huge capital outlays and skilled workers to both construct and administer them. Thus, as temporary storage, the corporation developed the cover and plinth (CAP) system as an ‘indigenously invented’ counter to silos. CAP was low in capital investment, requiring a large but relatively unskilled, labor force. The form manifested the horizontal expanse of storage, against the vertical stacking of the silo. The plinth with its Low Density Polyethylene covers hardly seems to embody the modernity of the silo, whose perfect combination of form and function, of massing and material, seemed emblematic of the new industrial American agricultural economy. CAP, on the other hand seems low tech, but it is not. The polyethylene sheets were the product of the new plastics economies, holding in chemical insecticides, while keeping out moisture. CAP is always in the process of being phased out, a relic of the celebrated moment when production grew faster than storage, while steel silos are being constructed as rapid rates through public private partnerships. While the silo offered a certain optic of modernity, it was the cover and plinth that allowed the state to accelerate into its modernity, in its infrastructurally inflected political economy of wheat.

[1] Walter Gropius published images of grain elevators in his 1913 article on industrial iconography, and Le Corbusier borrowed Gropius’s images for his exegesis on mass in his 1923 Vers Une Architecture (Towards an Architecture). However, it was not until Erich Mendelsohn’s visit to the United States in the 1924, that any European modernist had actually seen a grain elevator. The visit culminated in his picture book Amerika that simultaneously celebrated and eviscerated the American landscape as grotesque and primitive. Mendelsohn described the grain elevators of Chicago and Buffalo as delirium transformed to boldness and confusion to harmony, embodying an “expressiveness that corresponds to world consumption.” See Brown, William J. American Colossus: The Grain Elevator, 1843 to 1943. 1st edition. Colossal Books, 2015.

Ateya Khorakiwala is a PhD candidate in the department of Architecture, Landscape, and Urban Planning at Harvard University. Her work looks at the cultural and infrastructural projects embedded in India’s biopolitical revolution to augment food production in the 1950s and 60s. Earlier work has looked at road construction research in India in the 1960s and violence in photography in 1857. Her research has previously been supported by the American Institute of Indian Studies. She holds a BArch from KRVIA, Mumbai, and an MSc in Architecture Studies from the History, Theory, and Criticism of Architecture and Art program at MIT.

This post is part of our thematic series: The Nature of Infrastructure.