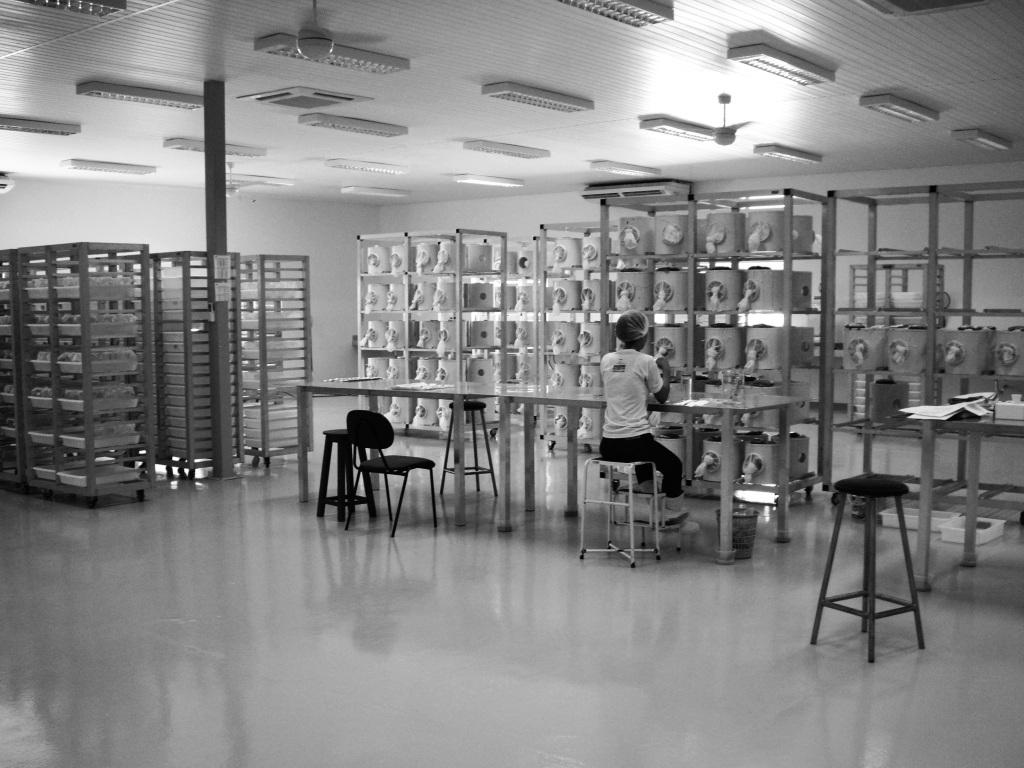 The inside of the mosquito rearing facility: rows of racks hold trays filled with larvae and cages filled with mosquitoes. The midrange shows the back of a worker wearing a hair net. Photo by author.

Editorial Note: This post is part of our series highlighting the work of the Anthropology and Environment Society’s 2020 Roy A. Rappaport Prize Finalists. We asked them to outline the argument they made in their submission and to situate their work in relation to the field of environmental anthropology.

ABSTRACT: The Aedes aegypti mosquito has gained notoriety as a vector for the Zika, dengue, and chikungunya viruses. Over the last century, public health campaigns in Brazil have targeted the A. aegypti, turning it into an enemy to be eliminated. New vector control strategies, however, strive to biologically modify individual mosquitoes in order to deploy them to control local populations of the insect. That is, strategies such as the transgenic A. aegypti require these modified mosquitoes to be reared and released to mate with the so-called wild ones. This case differs from other efforts to disentangle these insects from human lives and spaces by harnessing the A. aegypti itself. When transgenic mosquitoes are deployed, their breeding and mating are operationalized as an insecticide.

Drawing from environmental anthropology and science and technology studies, this paper investigates the management of multispecies relations in the implementation of this genetic strategy: the insect must be simultaneously an enemy and a friend, cared for and killed, and it must establish encounters and non-encounters. Based on ethnographic fieldwork at a “biofactory” in Brazil, dedicated to mass-producing these transgenic mosquitoes, I examine the new forms of labor and value produced through these contrasting human-mosquito relations. Analyzing the multispecies relationships engendered under the premise that it is possible to produce non-encounters, I identify the historical conditions and promissory claims of transforming the A. aegypti’s reproductive capacity, recasting it into labor for killing and yielding what I call the “non-encounter value” within the scientific remaking of mosquitoes, their becoming and being.

One weekend, during my fieldwork in the northeast of Brazil, I traveled to the city of Jacobina, Bahia, to accompany a “public engagement event.” The technician and staff scientist there with me were part of a project mass-producing a version of the Aedes aegypti—a mosquito that can transmit viruses such as dengue, chikungunya, Zika, and yellow fever—genetically modified to carry a transgene that could prevent the mosquito offspring from reaching adulthood.[1] The modified insects were to be released in hopes that they would mate with “wild” A. aegypti, leading to the death of the (heterozygote) progeny of such couplings. The goal was to reduce the overall population of the A. aegypti, with the aim of lessening the transmission of mosquito-borne diseases.

We set up a small tent in the main shopping street and brought a box of fine mesh net, filled with swarming transgenic mosquitoes to showcase to passersby. While we prepared for the day’s activities, the scientist, Pedro, confirmed that there were only males in the box we brought, putting his hand inside and making sure none of the mosquitoes would bite him. He knew that errors can happen in the manual and laborious sex separation based on pupal size (Phuc et al. 2007) and that one single biting mosquito would be enough to alarm those around it, failing the expected goal of acquiring public support. Only female mosquitoes bite because they need blood to mature their eggs, and the A. aegypti prefers biting humans (Mcbride et al. 2014). Thus, while the bite is a requirement to enable the mosquito’s reproduction, humans do not want the bite, do not want the insect’s proboscis in contact with their skin, and do not want mosquito saliva, which might contain pathogens. In this multispecies interaction, the exchange of fluids means the survival of some beings—mosquitoes—but a potential threat to others—humans.

Throughout the day, passersby were invited to put their hands inside the box and confirm that they would not be bitten. To put the hand inside a box full of mosquitoes became an evidentiary practice: a somatic test to establish a new kind of human-mosquito relation. To have the hand surrounded by swarming A. aegypti, to have proximity but without being bitten. These non-bites of transgenic males, this choreographed encounter, proponents hoped, should represent a performative, experiential promise of a non-encounter with mosquitoes.

Anthropologists and science and technology study (STS) scholars examining manipulated mosquitoes have highlighted how these strategies transform multispecies relations, turning the mosquito into a “flying public health tool,” an “auxiliary” in attempts to control diseases (Beisel and Boëte 2013; Dupé 2015). My paper suggests, however, that implementing this genetic strategy entails more than just turning a loathed organism into some sort of “friendly” mosquito. If the A. aegypti did not transmit diseases or did not exist in Jacobina, there would be no reason to release its transgenic counterpart. In other words, the mosquito can exist as an “ally” or a “friend” only to the extent that it also exists (simultaneously) as an enemy. I describe how these insects established ambivalent relations with the humans with whom they interacted—biofactory workers rearing them, scientists promoting them, residents living with them. As Haraway has argued, human becoming and being is constituted through encounters with “companion species”—those organisms that make us materially and discursively what and who we are.[2] Whereas Haraway writes that “becoming is always a becoming with,”[3] I suggest that becoming can also be a becoming without, through multispecies relations that happen under the premise and motivation of producing non-encounters.

By examining how these insects established ambivalent relations with humans with whom they interacted, I show how non-encounters create value. This adapts Haraway’s concept of encounter value, which accounts for the value-making process in experiential “engagements across difference” (Faier and Rofel 2014: 364). In the case of the transgenic mosquito, however, scientists, workers, and residents encountered these mosquitoes (and molded them to encounter their wild counterparts) under the premise that these would result in a severing of relations; an intimacy motivated by distance—these contrasting human-mosquito encounters generates what I call non-encounter value.

This non-encounter value also yields another transformation: the “response-ability” of humans towards mosquitoes. In response to Haraway’s call for response-ability—the ability to respond and share the suffering—towards other beings, STS scholar Uli Beisel (2010) has asked what it means to be “polite” with “dangerous species,” such as mosquitoes and pathogens they transmit. Concern should orbit around “ending [human] suffering”—not sharing it. For Beisel, response-ability towards mosquito beings is still possible but “the interesting question is not so much if we should or should not kill; the more relevant questions are rather concerned with how do we kill, who is the we, and how do we react to the mosquito’s response?”

In deploying transgenic A. aegypti, humans no longer have to engage in and respond to the killing of mosquitoes; that is, the response-ability shifts, delegated from humans to the mosquitoes themselves. Transgenic A. aegypti, turned into a technology of disease control through genetic modification, embodies the promise of encountering their own species and delivering non-encounters to humans. As they are released into streets, as they are cared for in the biofactory, and as they are conscripted into performing “non-bites,” transgenic mosquitoes become without humans. To become without entails relationally experiencing (the potential of) absence and distance as valuable. To adapt Haraway’s formulation: becoming without happens in a contact zone where the outcome—that is, where who is not in the world—is at stake (Haraway 2008: 244).

[1] In the presence of the antibiotic tetracycline the transgene is not expressed or is expressed at a very low and non-lethal level enabling rearing in a lab or biofactory (Paes de Andrade et al. 2016).

[2] Her primary example is the domesticated dog.

[3] This concept expands from the notion of “becoming” developed by Gilles Deleuze and Félix Guatarri—who define it as “new kinds of relations emerging from nonhierarchical alliances, symbiotic attachments, and the mingling of creative agents” (apud Kirksey and Helmreich 2010: 546). Haraway also borrows from Vinciane Despret’s (2004) concept of “with-ness” or “being with” which grasps with the modes of learning to be affected. For another theorization of this process, see Tsing (2015).

I’m grateful for the support and generosity of many different communities that have made this research and this article possible. Thank you also to the A&E Rappaport Committee: Dana Powell, Andrew Flachs, and Patrick Gallagher; to panel discussant Kregg Hetherington; and to my fellow 2020 Rappaport Panel finalists: Bradley M. Jones, Cynthia Morinville, Dan Schniedewind, and Serena Stein. Rachel Prentice offered thoughtful and helpful comments, as part of the Rappaport Award mentoring program. For his assistance with this blog post, thanks also to Colin Hoag.

Tsing, Anna Lowenhaupt. 2015. The Mushroom at the End of the World : On the Possibility of Life in Capitalist Ruins. Princeton: Princeton University Press.

Luísa Reis-Castro is a PhD candidate in the History, Anthropology, and Science, Technology, and Society (HASTS) program at the Massachusetts Institute of Technology (MIT). She is currently writing her dissertation on new technologies for controlling mosquito-borne diseases, as a window into the politics of science, health, and the environment.

This post is part of our series, 2020 Roy A. Rappaport Prize Finalists.