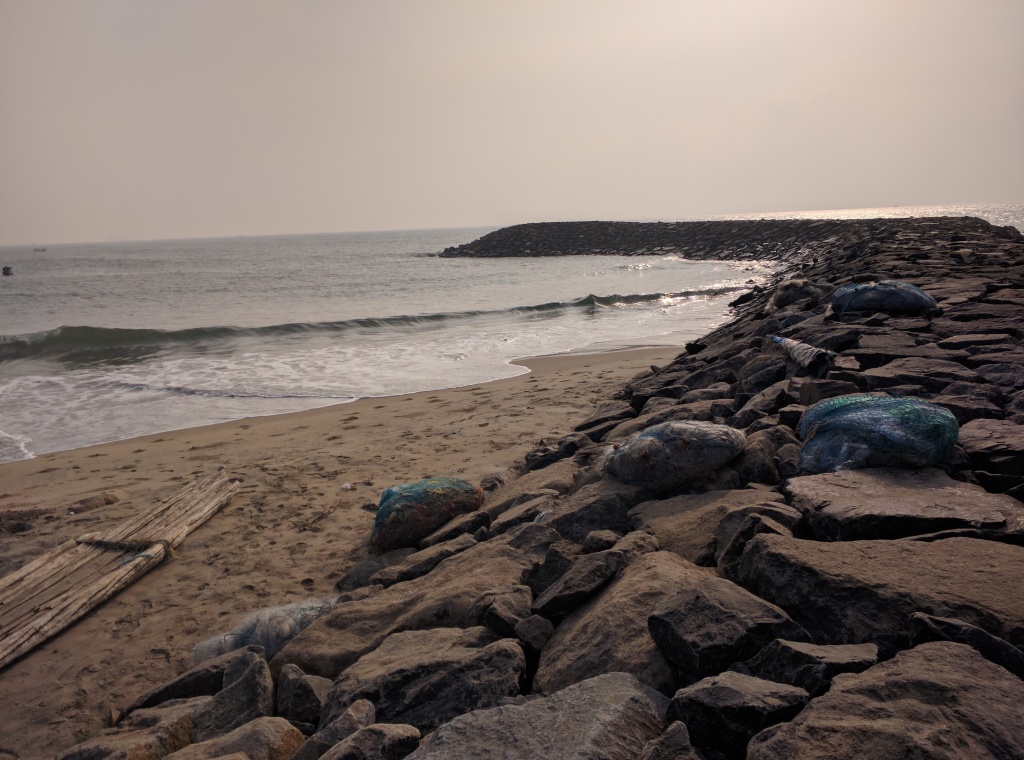 Editorial Note: This post is part of our series highlighting the work of the Anthropology and Environment Society’s 2021 Roy A. Rappaport Prize Finalists. We asked them to outline the argument they made in their submission and to situate their work in relation to the field of environmental anthropology.

ABSTRACT: Rising sea-levels and hurricanes at coastlines have made engineering interventions for coastal defense and maintenance into objects of global environmental and political concern. In this paper, I probe the unexpected emergence of dredging, an engineering practice of excavating sediments from aquatic environments, as a common ground for diverse political futures in Ennore, an industrial coastal region of Chennai, India. Taking dredging as an ethnographic object, I show that dredging to manage water depth is not simply a technoscientific process as discussed in coastal engineering literature. Rather, dredging is simultaneously a “geosocial” process where humans act as geologic actors shifting sediments and a political one where coastal publics contest how water depth ought to be managed. Drawing on environmental anthropology and STS, I examine the geosocial politics that shape how Tamil fishers, environmentalists and coastal engineers understand and manage water depth through dredging. Based on 15 months of ethnographic research, I bring ethnographic interviews and landscape tours conducted with Tamil fishers and environmentalists into conversation with archival analysis of coastal engineering reports.

Late one monsoon evening in Ennore, an industrial coastal region in Chennai, I found myself standing at the farthest edge of a T-shaped groyne, a low wall made of boulders that extended perpendicular to the beach and jutted into the sea. Ganesh Anna, who was my friend, a sea-fisherman, and a worker at one of the coal power plants in Ennore had deliberately chosen this spot so that I could see the sea waters on one side and all the industries that lined the shore on the other side. But when you stand in the middle of a groyne, you also need to tread carefully, trying not to cut yourself against the jagged edge of the rocks or get washed away by the waves crashing against the boulders. My precarious position on top of the groyne demanded that I train my attention on the myriad engineering interventions–seawalls, dredger machines, groynes–that made industrial construction possible at the fragile coastline. In this paper, I examine the history and politics around one such coastal engineering practice called dredging. Like many ethnographic arrival stories, “Dredging for Common Ground” begins in the “middle” of these interwoven layers of water, technology, and people at the Coromandel coast.

Dredging is a controversial and extractive socio-technical practice. It is a process of excavating earth materials like silt and sediment from under the water in aquatic environments like deltas, rivers, or estuaries to manage the depth of the water column. In Ennore, multiple forms of dredging happen at the same time. On the one hand, the Ennore port dredges sand at sea and later dumps it in the Ennore creek’s inland waters to create new land for industrial construction. Such land reclamation is central to continued industrial expansion at the coast. On the other hand, fishers and environmentalists demand the dredging of the Ennore creek to make it navigable for fishing and to ensure that flood waters can flow into the sea. Even fishers who previously critiqued the deleterious impacts of dredging on fishing practices find themselves in the unusual position of having to demand dredging so that the waters are deep enough for their boats to ply. In the essay I puzzle through the question: how has dredging, a socio-technical process rooted in histories of extraction through land reclamation, emerged as a common political ground for fishers and environmentalists who imagine a non-extractive coastal future?

To examine the dynamic interactions between people, technology, and environment generated by dredging, I bring into conversation the scholarship on the politics of infrastructure that attends to the imbrication of the social and technical, and work on geosocial and wet theory that takes seriously the materiality of earth and water. I am also excited to be a part of emerging interdisciplinary environmental scholarship on dredging, such as Ashley Carse and Joshua Lewis’ work on dredging as a political ecological process, Ben Mendelhson on dredging as constitutive of city-making in Lagos, and Ramya Swayamprakash on the environmental history of dredging in the Detroit River. “Dredging for Common Ground” is a part of the story I tell in my dissertation project about the unexpected entanglements between human and nonhuman processes traditionally theorized as oppositional to each other: extractive engineering interventions like dredging, everyday practices of ecological restoration, and geomorphological processes of erosion and sedimentation.

Oviya Govindan is a doctoral candidate at the Department of Anthropology, University of California Irvine, with interests in the study of everyday economic life and environmental change, public finance, and infrastructure. Her dissertation project, “Making Coastal Natures Work,” traces how the shifting boundaries of land and water at the coast generate new ways of thinking about social categories of work, environment, and value. Her fieldwork was funded by the Wenner-Gren Foundation.

This post is part of our series, 2021 Roy A. Rappaport Prize Finalists.