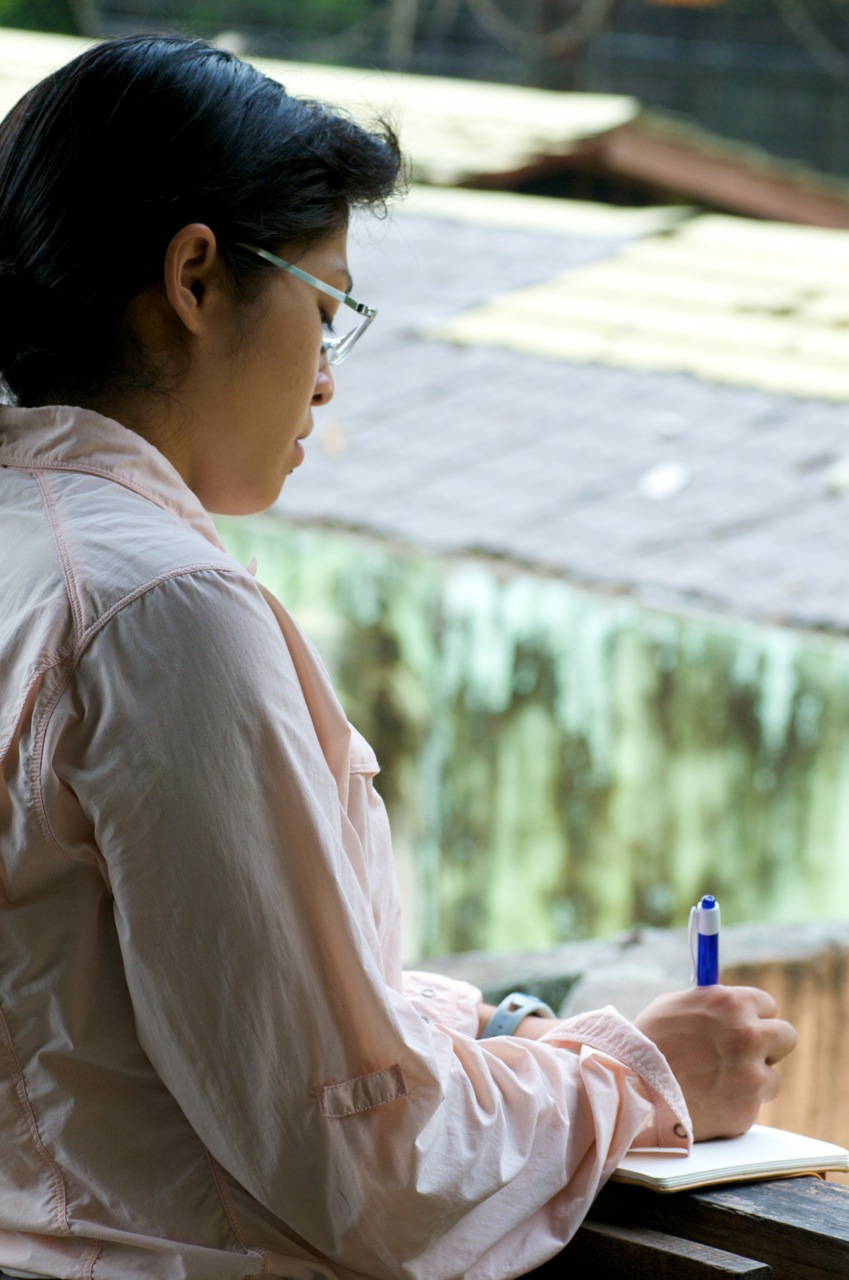 Ethnographic research often gets divided between “studying up” via Laura Nader (1972 [1964]) and studying with “a view from below” via E. P. Thompson (Thompson 1968). Both approaches offer important ways for understanding social relations, but they don’t quite work for multispecies ethnography.

Let’s consider studying up. Karen Ho’s (Ho 2009) excellent ethnography of Wall Street illustrates the importance of this methodology: banks have separate elevators that take their back-office, middle-office, and executive workers up the floors of the bank and up the corporate hierarchy. Ho suggests that the long hours and job insecurity that have become common in many sectors of the economy have their origins in corporate finance culture and the imposition of elite Wall Street values onto life for the rest of us. This kind of research shows that what we have come to take for granted wasn’t always this way. Knowing that the status quo has not been forever–that if it has a beginning, then it can have an end–inspires us to think about other ways of becoming (Haraway 2008; Le Guin 2014).[i]

On the opposite end, we have an equally influential approach of ethnography from below. Inspired by New Left critic and social historian E. P. Thompson, critical anthropologists prioritize the lives and perspectives of everyday people, like enslaved West Africans forced to fuel Industrialization with their bodies and lives at Caribbean sugar plantations or Illongot headhunters marginalized by the Philippine nation-state (Hughes 2015; Mintz 1985; Rosaldo 1980; Rosaldo 1990; Wolf 1982).[ii] Anthropologists who are committed to the perspectives of those who seldom receive an audience urge us to work towards more just futures.

These two ways of looking at social relations suggest that ethnographic perspectives work like elevators shuttling up and down a social hierarchy. Yet when non-human agents are ethnographic subjects, studying up or down doesn’t easily fit our research. This elevator model can’t get multispecies ethnographers to where we need to go.

Multispecies ethnography forces us to step outside of an elevator model of ethnography and figure out our positions as researchers in what Eduardo Kohn calls the “Open Whole” (Kirksey and Helmreich 2010; Kohn 2013; Tsing 2005). Contrary to critics of the ontological turn, talking about “open wholes” is not to ignore imposed hierarchies, whether caused by colonialism, capitalism, patriarchy, the Enlightenment, or a combination of these and beyond (Bessire and Bond 2014). We are not space cadets trying to abandon earthly gravitational pull for an outer space where nothing anchors us. Rather, we need to be attuned to multiple hierarchies and open to surprises (Raffles 2010).[iii]

Take, for instance, an example from my own fieldwork in Malaysia with semi-wild orangutans and the people caring for them. One adult female orangutan had a reputation for biting local women due to a traumatic event in her life history (Braitman 2014). Orangutan bites usually require hospitalization. As a Filipina-American, I was technically foreign. Yet, this particular orangutan had the power to reduce me to an essentialized gendered and racialized positionality based on my appearance. I was vulnerable to her attack; so were the female staff members and any of the eco-volunteers working at the site with similar features.[iv] Our different diasporic histories didn’t matter to her—although they determined who needed to be there for wages and who had the privilege to be there temporarily. The orangutan herself was subjected to constraints of space rooted in colonial and postcolonial histories of making territories. And those constraints were, for her, gendered insofar that her sex affected her relationship to space. For instance, whenever managers thought she should get pregnant, she would be forced into captivity with a male orangutan for the purpose of procreation (Parreñas forthcoming; Padoch and Peluso 1996).

Reproduction for endangered wildlife is too often seen as the pinnacle of their existence. Yet the idea is ridiculous when applied to humans, as The Onion (2013) shows. Can we imagine other ways wildlife can live without privileging reproduction?

A tool bag drawing from multiple disciplines can heighten sensitivities to these and other issues. Like human-centered ethnographers, multispecies ethnographers have to be open to the unexpected ways in which power may not work as we anticipate. Yet unlike human-centered ethnographers, we cannot rely on human speech, which itself is never a means to fully comprehend what happens in the field. When you can’t turn to language for answers, where do you turn?

Kohn (2007) turns to semiotics. Hayward (2010) turns to touch. Following Fuentes (2010), I turn to primatology. Primatology for me is one analytic among many, including feminist theory via Audre Lorde (1984) Donna Haraway (2008), Carla Freccero (2011), and Banu Subramaniam (2014). Relations across differences in feminist theory are a source of power through friction (Tsing 2005).

If studying up teaches us the contingency of power and if studying from below teaches us resistance to power structures, then multispecies ethnography suggests the instability of power in our fragile worlds, which we sense through our vulnerable bodies (Dave 2014; Govindrajan 2015; Livingston 2012; Parreñas 2016; Povinelli 2006).

[i] Here I’m inspired by Ursula Le Guin’s acceptance speech at the 2014 National Book Awards, at which she said, “We live in capitalism, its power seems inescapable – but then, so did the divine right of kings…” I’m also inspired by Donna Haraway’s attention to becoming in When Species Meet. The idea of “being” is far too fixed!

[ii] I am indebted to David Hughes and his new book project Ordinary Oil for thinking about enslavement as a form of energy exploitation.

[iii] This is conveyed to me by Hugh Raffles’ Insectopedia, in which he tells his readers, “Stop. If you’re inside, go to a window. Throw it open and turn your face to the sky. All that empty space, the deep vastness of the air, the heavens wide above you. The sky is full of insects, and all of them are going somewhere. Every day, above and around us, the collective voyage of billions of things. That’s the letter A: the first thing not to forget. There are other worlds around us. Too often, we pass through them unknowing, seeing but blind, hearing but deaf, touching but not feeling, contained by the limits of our senses, the banality of our imaginations, our Ptolemaic certitudes.” (2010:12) He calls for new tools that open our imaginations, shake off our self-centered orientations, and become more sensitive to the worlds of others around us.

[iv] Eco-volunteers were there as part of a commercial volunteering enterprise in which they paid a thousand US dollars per week at the site to conduct manual labor. See Parreñas 2012 and the forthcoming January 2016 issue on ‘Intimate Industries’ in the journal positions: asia critique for more on commercial volunteerism. For more on volunteerism, see Muehlebach (2012) and Watanabe (2014).

Juno Salazar Parreñas (PhD in Anthropology, Harvard University, 2012) is an Assistant Professor of Women’s, Gender, and Sexuality Studies at The Ohio State University and has held postdoctoral fellowships in Agrarian Studies at Yale University and at the Rutgers Center for Historical Analysis. She received the 2013 GAD Exemplary Cross-Field Scholarship Prize for her American Ethnologist article, “Producing Affect.” She is now working on her monograph Interfacing Extinction: An Ethnography of Orangutan Rehabilitation and editing the Macmillan Interdisciplinary Handbook on Gender: Animals.

This post is part of our thematic series, Multi-Species Anthropology: Becoming Human with Others.